Our editors pick the products & services we write about. When you buy through our links, we may get a commission. Learn more.

If you didn’t know, OBD1 code readers are scan tools for cars manufactured before 1996. OBD1 cars have first generation ‘Onboard Diagnostics’ systems. As you can tell by the name, the OBD system allows mechanics to diagnose problems in the car.

However, mechanics need a scan tool to scan your car’s system, read the trouble code, and find out the problem. Scan tools for OBD1 systems are usually specific to each manufacturer. These days most cars have OBD2 systems, which are more generic.

It can be hard to find manufacturer specific OBD1 code readers, which is why manufacturers switched to OBD2 in the first place. You can tell if your car is OBD1 or OBD2 by checking its year of manufacture.

If you want to read the codes on your OBD1 system, you’ll need a reliable OBD1 code reader. Although, deciding which one to get might be frustrating.

Reading codes is a simple task you can do yourself. Hence, you don’t need to pay a mechanic to do it for you.

To help you pick the best one for your car, here is our list of the best OBD1 code readers for manufacturers including Chrysler, Toyota, BMW, Ford, Honda, and so on.

4.2 / 5
The Actron CP9690 is a two-in-one investment. Not only does the Actron read codes for OBD1 cars, but it also reads codes for OBD2 cars, even earlier models of OBD2 cars made in 1994.
Check Price at Amazon

If you’re looking for OBD1 scanners for cars made between 1984 and 1995, this is a great choice. The Actron CP9690 is a two-in-one investment. Not only does the Actron read codes for OBD1 cars, but it also reads codes for OBD2 cars, even earlier models of OBD2 cars made in 1994.

The OBD1 code reader is also good for comprehensive testing. The features include CodeConnect, which is a database of over 26 million Diagnostic Trouble Codes (or DTCs). You can erase and turn off your Check Engine light as well as your ABS and Airbag lights.

The OBD1 OBD2 scanner has a comprehensive dictionary for ABS and Airbag trouble codes for all Toyotas, Chryslers, and Fords made between 1996 and 2015. For OBD1 vehicles, you can record and playback live-data as much as you want. Apart from that, you’ll be able to check your MIL status, emissions, and freeze frame data.

The Actron CP9690 requires a cable connection, making it compatible with all USB supported devices. You can download any OBD software on your laptop, and it will read the code.

Specific to GMs, Fords, Chryslers, Toyotas but can also work with Hondas, Nissans, and Hyundais.

4.3 / 5
The INNOVA 3123 GM OBD1 code reader is an OBD1 scanner specifically for GM vehicles. It works on almost all GM cars and trucks manufactured between 1982 to 1995. It is a safe, foolproof way to access your car’s OBD system.
Check Price at Amazon

The INNOVA 3123 GM OBD1 code reader is an OBD1 scanner specifically for GM vehicles. It works on almost all GM cars and trucks manufactured between 1982 to 1995. It is a safe, foolproof way to access your car’s OBD system.

Also, this OBD1 scan tool will tell you exactly what’s wrong, no matter the magnitude of the problem. You can use this OBD1 scanner for GMs to read codes on your ECM and ABS systems. You’ll be pointed in the right direction after which you can easily go to the mechanic to fix the problem.

After the problem is fixed, the Check Engine light/ABS light will automatically turn off.

Moreover, INNOVA 3123 is highly user-friendly. Its user guide is very detailed, listing out the definition of each code along with different illustrations to make it easier to understand. The definitions even come with suggestions for quick fixes.

Specific to General Motors domestic cars and trucks built between 1982 and 1995 only (not for heavy duty vehicles). 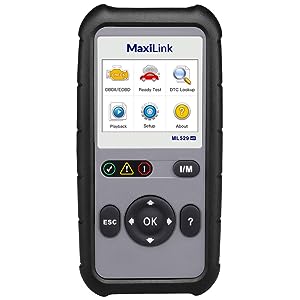 4.3 / 5
This OBD1 scanner might be specific to Fords, but it also reads most OBD1 Lincoln and Mercury cars and trucks. The INNOVA 3145 Digital Ford scanner is even better than the INNOVA 3123 GM. It displays each trouble code in numerical form on an easy-to-see digital screen.
Check Price at Amazon

This OBD1 scanner might be specific to Fords, but it also reads most OBD1 Lincoln and Mercury cars and trucks. The INNOVA 3145 Digital Ford scanner is even better than the INNOVA 3123 GM. It displays each trouble code in numerical form on an easy-to-see digital screen.

You no longer have to decipher Morse code by noting down the number of flashes. This Ford OBD1 scanner simply shows you the code as you can look it up in the DCT dictionary provided to you.

Furthermore, the INNOVA 3145 code reader gives detailed instructions for all Ford self-testing. You don’t have to take your car to the mechanic. Easily find out the problem yourself. It also has an advanced built-in memory system so you can read codes even when the device is unplugged.

This Ford OBD1 scanner even performs engine and transmission diagnostics. However, the scanner will only retrieve the code not generate it. This means that the scanner will serve as a key i.e., it will show you the problem, but it won’t tell you what the problem is.

You’ll have to look up the code on your own or reach out to a mechanic to find out the problem. You can just Google the code if you want. Most codes are easily available online.

Specific to Fords but is also compatible with Lincoln and Mercury vehicles with MCU and EEC-IV computer systems.

This OBD scan tool comes highly recommended by users. It has multiple functions and supports both OBD1 and OBD2 protocols. The LAUNCH CRP423 supports more than 53 automobile manufacturers as well as most non-US vehicles, including Korean, Japanese, Russian, Polish, French, German, and Spanish cars.

The LAUNCH CRP423 OBD1 Scanner reads and erases codes for all ABS, SRS, transmission, and engine systems. You’ll find a large database of DTCs and graphical representation of live stream data. You can conduct many tests for your OBD1 vehicle including O2 sensor and EVAP system tests.

This OBD1 scanner tool has a five-inch 750 HP touch screen on which you view data. It supports all USB supported Android, iOS, and Windows devices. Furthermore, the LAUNCH CRP423 scanner can be used in nine different languages, including English, French, Japanese, Korean, and German.

The entire package includes the LAUNCH CRP423 OBD1 and OBD2 scan tool, one handset, one diagnostic cable, and one USB cable so you’ll have everything you need.

3.9 / 5
The INNOVA 3140 OBD1 Bluetooth code reader is a more advanced version of the INNOVA GM and INNOVA Ford scanners. The OBD1 and OBD2 scanner is compatible with most OBD1 vehicles manufactured between 1882 to 1995 as well as foreign and domestic OBD2 vehicles.
Check Price at Amazon

The INNOVA 3140 OBD1 Bluetooth code reader is a more advanced version of the INNOVA GM and INNOVA Ford scanners. The OBD1 and OBD2 scanner is compatible with most OBD1 vehicles manufactured between 1882 to 1995 as well as foreign and domestic OBD2 vehicles.

Furthermore, this OBD1 scan tool has wireless, Bluetooth connectivity, which makes it easier to connect with all modern devices.

The Bluetooth function allows you to pair your devices with RepairSolutions, which is a web service that connects you with professional technicians. You can ask them any questions or concerns you have, and they’ll get back to you as soon as possible.

Additionally, the INNOVA 3140 Bluetooth scanner reads and erases codes for ABS, SRS, and Airbag systems. It can even reset the oil light for select cars.

Your data will be displayed via a live feed. You can use the scan tool to record, pause, and stream the data from your OBD1 system.

Specific to Chevys, Fords, Chryslers, Hondas, Toyotas, and Lexus only.

With its multiple advanced features, the FOXWELL NT510 BMW OBD1 scanner is a smart choice. If you own a BMW, you should consider buying this OBD1 and OBD2 scanner.

The FOXWELL NT510 covers all the primary systems of BMW cars, including engine, ABS, SRS, DISA, DSC, airbag, and transmission.

Moreover, this OBD1 and OBD2 scan tool let you activate and deactivate your ABS module, brake system, oil light, and interval reset. For OBD1 vehicles specifically, the scanner makes it easier to keep track of your car’s data. Like with other scanners, you can record, and playback live data. However, you can also directly print and share the data you want.

Hence, you can conveniently share the diagnostic report to your mechanic.

Simply put, this OBD1 and OBD2 code reader is perfect for diagnosing problems in BMWs. It’s a good tool to have whether you’re a professional or an ordinary car owner. The FOXWELL NT510 is more efficient and more accurate than other OBD1 scanners according to most verified customer reviews.

Specific to most BMW series made between 1987 and 1996 as well as modern vehicles.

To see the complete list of BMW series it supports, go to ‘Vehicle Service Type’ under ‘Product Information’.

4 / 5
The Innova 3120 works on a range of vehicles including OBD1, OBD2, EOBD, and JOBD cars, trucks, and hybrids. Like the INNOVA 3140 OBD1 reader, the Bluetooth connection also allows pairing with RepairSolutions. Specific to GMs, Fords, Chryslers, Hondas, Lexus, and Toyotas made between 1982 and 1995.
Check Price at Amazon

If you want the job done quickly, this is the OBD1 code reader for you. The Innova 3120 works on a range of vehicles including OBD1, OBD2, EOBD, and JOBD cars, trucks, and hybrids. Like the INNOVA 3140 OBD1 reader, the Bluetooth connection also allows pairing with RepairSolutions.

You can opt for professional help anytime you need it. Additionally, the OBD1 code reader offers many internet updates to ensure you get the best quality code reading. The Innova 3120 also has a LED light on its connection cable so you can see the OBD1 or OBD2 interface even in the dark.

Furthermore, the Innova 3120 will turn off the Check Engine light for all OBD1 vehicles it’s compatible for. It will show your Emissions Readiness status, freeze frame data, and even your EVAP codes.

For the entire list of supported brands and vehicle types, refer to the ‘Quick Reference Guide.’

It might be confusing keeping track of all these OBD1 scanners. To make it easier for you, we have come up with a chart to help you keep track of the features offered by all these code readers.

Here is a detailed comparison of each OBD1 code reader we have listed.

Selecting the best OBD1 code reader is harder than picking one for an OBD2 car. You need to see if the scan tool suits your car, which is rare if your car is very old. Apart from compatibility, you need to see quality as it is futile having an OBD1 compatible scan tool if its quality isn’t good.

Taking all these features into consideration, here are our recommendations for the OBD1 code readers you should buy.

In sum, these three OBD1 code readers will give full customer satisfaction. These high-quality products come highly recommended by users. With each product, you’ll find great customer service so if you have questions you can direct it towards them.

To conclude, having an OBD1 scan tool is handy, especially if your car was made prior to 1990. It’s unlikely that most modern-day mechanics will have the right OBD tools for your vehicle, so it’s better you buy one yourself.

Older cars require constant maintenance to run smoothly so buying an OBD1 code reader will let you keep track of your car’s systems. Hence, we recommend that you try out our list of the best OBD1 scan tools. Any of these products will be a reliable addition to your toolbox.